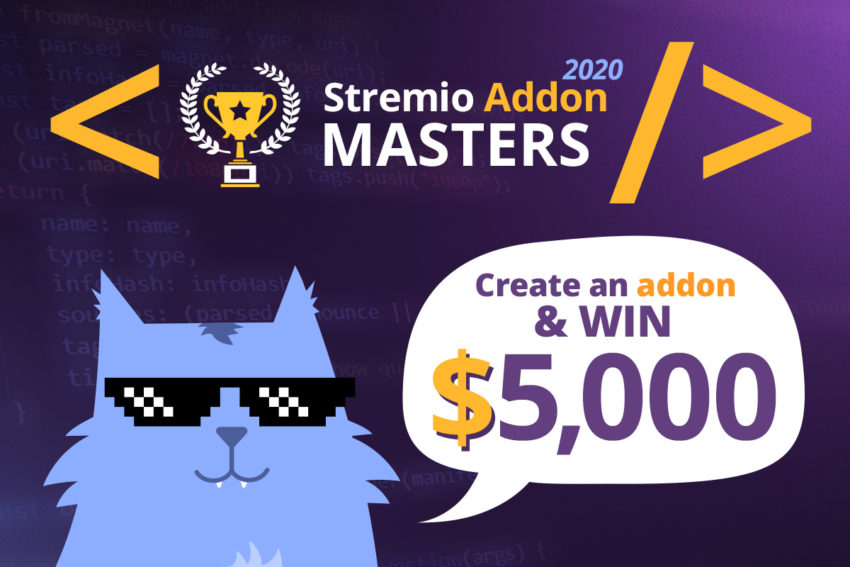 The Stremio ADDON МASTERS 2020 competition will be open for submissions soon! Yes, a new, third edition of our beloved annual addon contest is about to begin!

The response we got from the first two addon competitions we held was overwhelming –  we received an unexpected number of submissions and a ton of new content was brought to your favorite media center, so we are very excited!  Are you ready for the 3rd edition of Stremio ADDON MASTERS?

Addon developers will be competing for a price pool of $5,000 US, payable via PayPal or in cryptocurrency (BTC).

Four prizes will be awarded to deserving winners:

The contest will open on December 23, 2019. On that day, a button for submitting your addon will appear on stremio.com/competition. The submission window closes on March 27, 2020 – but don’t wait till the very last minute!

Need ideas for addons you can create? There is a Reddit discussion where Stremio users post their requests – check it out for inspiration.

With the latest version of the addon SDK, you can publish addons on IPFS, which improves addon longevity and your privacy. Read more about this on our GitHub.

Q: Do I need programming skills to participate?

A: Yes. You need to be able to code in order to create an addon.

Q: Can I participate both as a judge, and as an addon developer?

A: Sadly, no. There’s a conflict of interest here, and while we trust you won’t judge your own addon to be the best one, we’d rather keep things clean.

Q: Do I need to host the addon I create?

A: You can if you want to, but you don’t have to. A link to the Git repository of the addon is enough to enter the competition.

Q: Can I submit more than one addon?

A: Absolutely! You can submit as many addons as you wish.

Q: Can I submit an addon that I developed before the contest and/or submitted in a previous competition?

A: No to both. Only addons that were developed after the official start of the contest are eligible for prizes.

Q: Can I create an addon that is country-specific?

Q: Can I ask my friends to vote for my addon?

A: Yes! And not just your friends – we recommend you ask your mom, your grandma and aunt Sheril to vote too, so you have an even better chance to win our community vote.

Q: What’s the answer to the Universe?