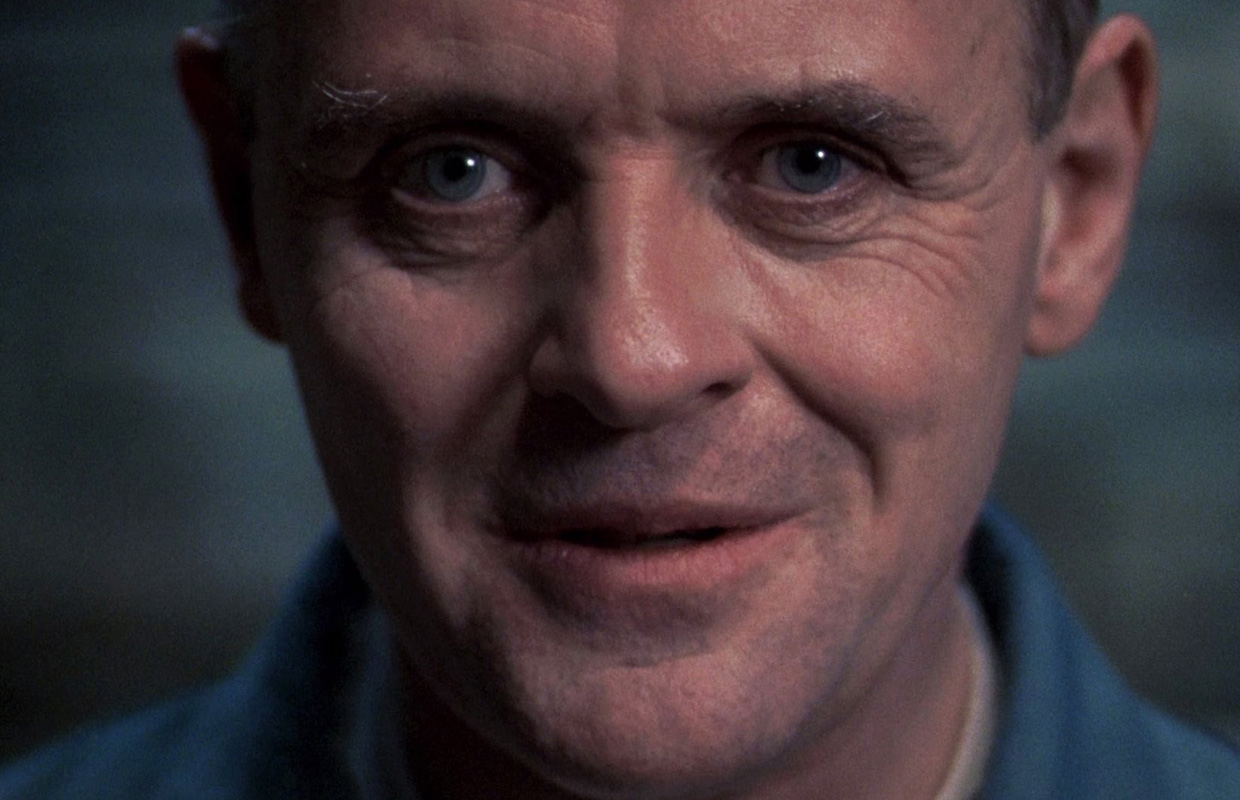 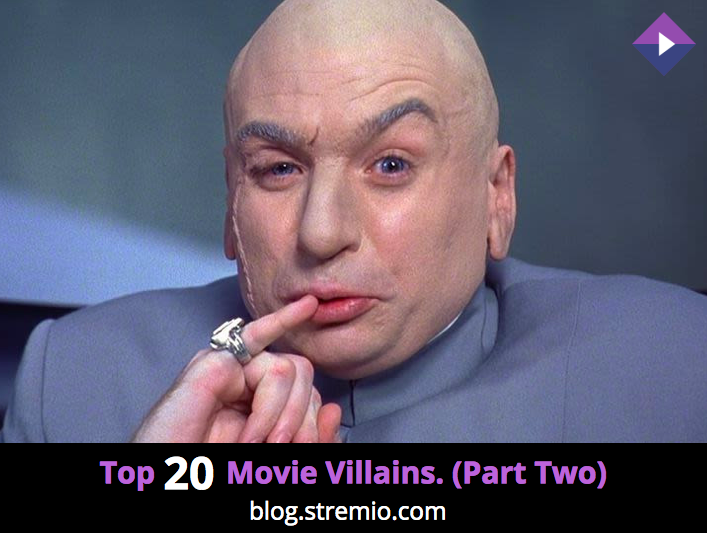 So, as promised, here is the second part of our countdown for 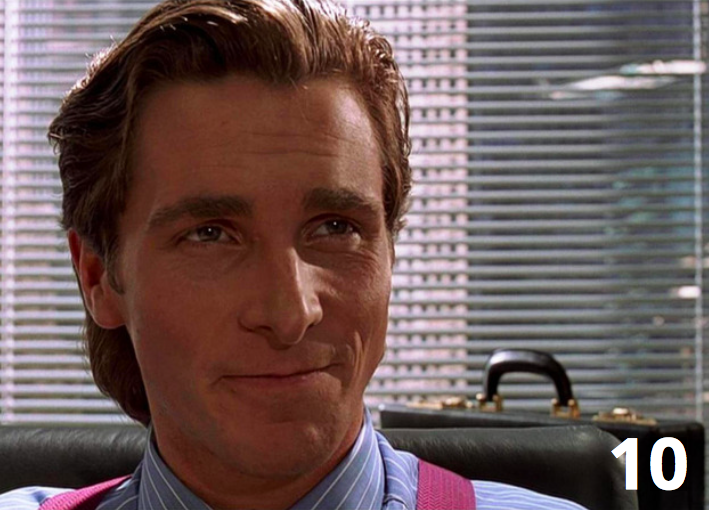 Famous quote: “You’re a fucking ugly bitch. I want to stab you to death, and then play around with your blood.”

Prestigious work, high salary, beautiful appearance, rich apartment. Patrick Bateman has it all. But behind his rich and famous life, there is a brutal psychopath who has no pity or compassion. A sleek, arrogant, lonely sociopath who uses his money and position to hide his crimes.  But, worst of all, he is a part of the society. A vicious, hypocritical and selfish society. The people shown in the film are, in their essence, nothing better than him. The only thing that makes them positive is that they do not kill people, and that’s because they are just afraid of being convicted. Pedants, grumblers, soulless, faceless creatures. They do not hear anyone but themselves. The concepts of honor, conscience, and friendship have long vanished. In this grotesque world, Bateman can even sometimes seem like a likable character, but don’t be fooled… 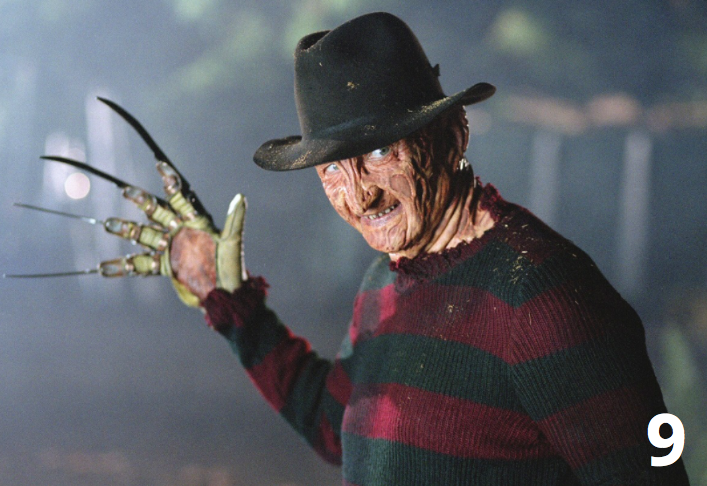 Movie: “A Nightmare on Elm Street”

Famous quote: “What are you shouting, I haven’t yet begun to cut you”.

One of the most memorable movie villains of all time. Its habitat is the world of dreams that every one of us visits every day. Therefore, it is impossible for Krueger’s victims to hide from him. He waits for them where they are most vulnerable – in their sleep. He imposes his own rules of the game. Original ways of killing, black humor with elements of sadism, nightmarish appearance, quiet insinuating voice – every detail of Kruger is remembered and is guaranteed to scare you to death! 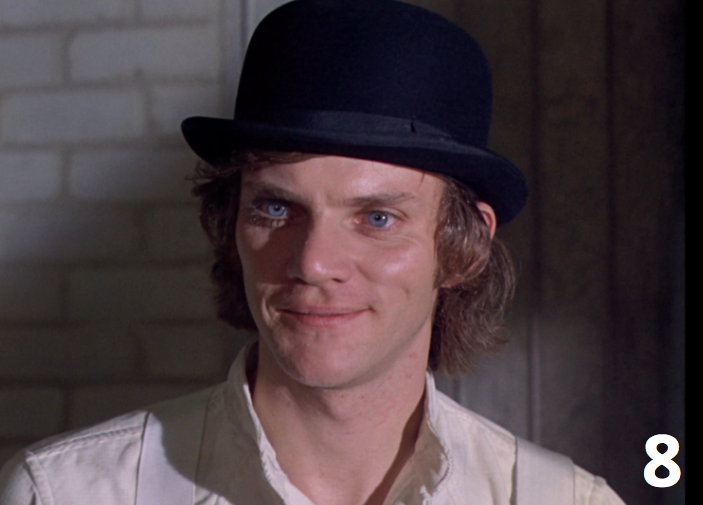 Alex is the protagonist and the narrator in the Stanley Kubrick’s film “A Clockwork Orange”. He is portrayed as a sociopath, plundering, raping, and, ultimately, killing for his own pleasure. Alex realizes that such behavior is wrong, saying that “you can not have a society consisting of people leading my nocturnal lifestyle.” He believes that he was somewhat puzzled by the motivations of those who wanted to transform him and others like him, saying that he would never interfere with their desire to be good.

He loves milk and is always using a variety of stimulants. He loves classical music, especially Beethoven, or, as he calls it, “the beautiful Ludwig Van”. Listening to this music, he fantasizes about the fear of death, about torture and massacres, while experiencing something like an orgasm.

Malcolm McDowell’s most memorable performance is absolutely brilliant and gives us a peek inside of the mind of a lunatic. The main character is unpredictable, crazy and dangerous. You never know what he is gonna do next. Тhis frightening unpredictability is one of the reasons we still can’t forget Alex Delarge! And why should we? 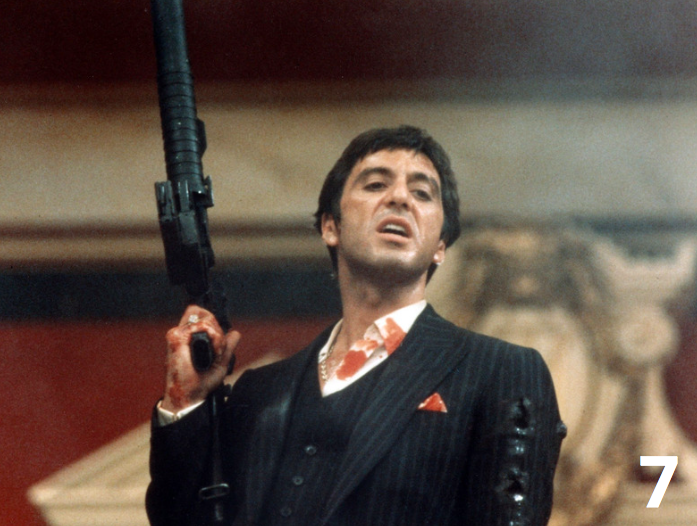 Famous Quote: “You wanna fuck with me? Okay. You wanna play rough? Okay. Say hello to my little friend!”

In the spring of 1980 thousands of Cuban refugees rushed to the United States in search of the American Dream. One of them found that dream in the sun-drenched streets of Miami. Wealth and unlimited power – these are his ultimate goals. Of course, we are talking about Tony Montana. The world remembered him under a different name – “Scarface”. A brutal gangster who lives only by his own rules and eliminates every obstacle on his way.

Pacino’s memorable acting in this Brian De Palma masterpiece is pure class and it deserves to be in the textbooks as an example of how to play a villain. If you don’t believe us, apparently you haven’t seen Scarface yet! 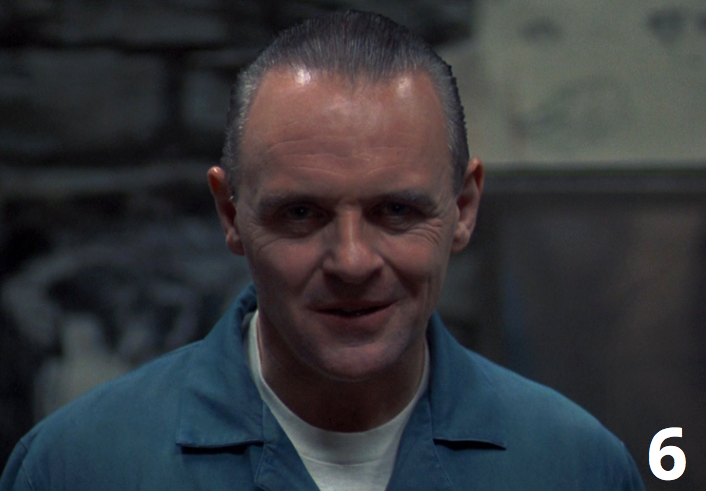 Movie: “The Silence of the Lambs”

Famous quote: “A census taker once tried to test me. I ate his liver with some fava beans and a nice Chianti. “

A psychiatrist, a surgeon and at the same time a monstrous serial killer practicing cannibalism. Prudent, intelligent and cynical – this is Hannibal Lecter. He perfectly understands what crimes he committed, but what he really thinks about it- always eludes us. Being caught, he sits in a prison cell, often reads books and listens to Mozart. But even behind the impenetrable plastic glass, he is a big threat for others. He is not just smart and observant. Lecter has an analytical mind and is a very sensitive man. His perceptiveness passes all conceivable boundaries. He easily sees through people and with a satisfied smile is able to turn their lives inside out. And even being behind bars, he can bring death to people, if, of course, he wants to. 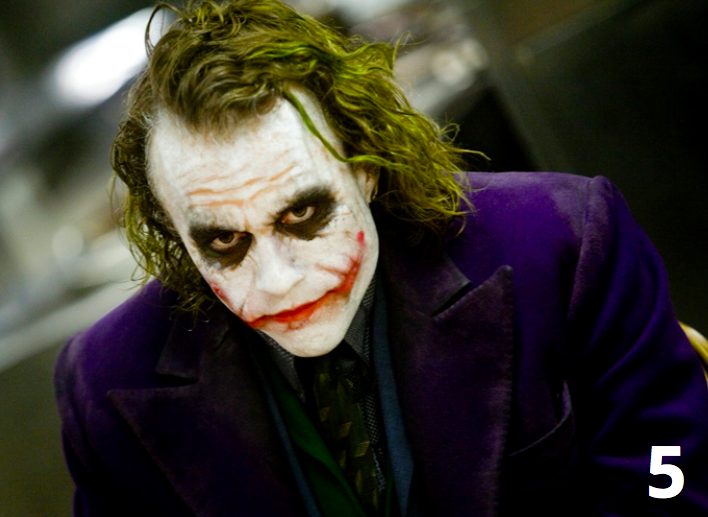 Famous quote: “Why so serious?”

An intellectual bastard who leads his game according to his own rules. The unbridled cruelty of the Joker is captivating. Terror acts, crazy mind games, manipulation of human consciousness. An ingenious strategist without any purpose. Joker’s actions can not be explained. He does not need money or power. Everybody is afraid of him – the people in Gotham, the police, and even the mafia. He is always one step ahead of everybody. Joker’s moves are so ingenious, original and unpredictable that you involuntarily admire the craftsmanship of this villain. He does not have a clear goal – he just wants to play his game, enjoying it, frightening the whole metropolis and plunging it into a world of anarchy and chaos. 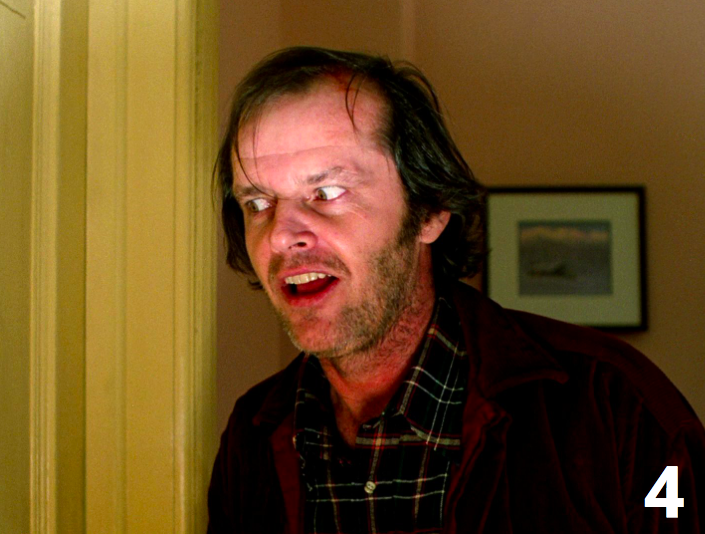 Previously working as a teacher, Jack left his job and took up his career as a writer. To get the opportunity to finish his book, he and his family moved to a remote hotel, closed for visitors in the winter. But evil spirits inhabiting the hotel begin to pursue Jack, and eventually drive him crazy, which makes him decide to kill his family – his wife Wendy and his son – Danny.

The amazing performance of Jack Nicholson is considered to be one of the best ever in the history of cinema. With a lot of memorable moments, Jack Torrance, without a doubt, became an iconic character.

With his acting, Jack Nicholson managed to reveal his character from the psychological point of view. This facial expression of the madman, the crazy smile on his face and his insane look just sticks in your head for a long, long time! 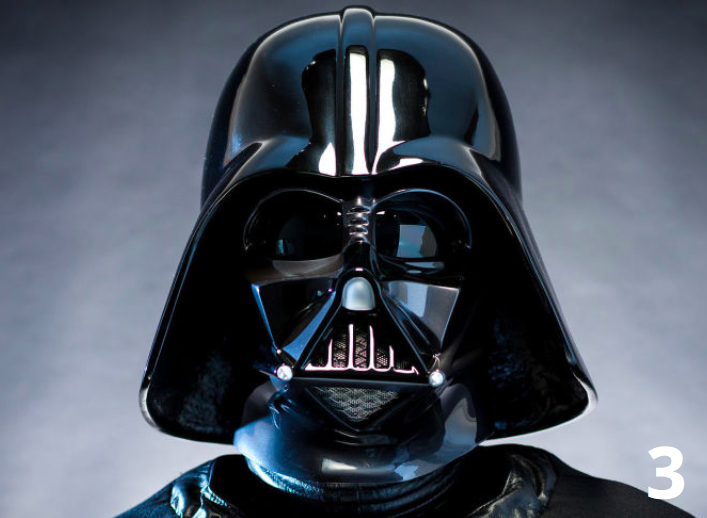 Famous Quote: “He will join us or die, Master.”

Darth Vader became the most vivid figure in the Star Wars universe. He is a brutal, cold and soulless machine that does not have feelings. Maybe that’s why it seems so terrible. But also, thanks to the mask, there is a feeling that there is still something good left in him. Probably, because of his complexity, he became such a cult character. One thing is for sure, once you see him on the big screen, you will never forget the image of Darth Vader. 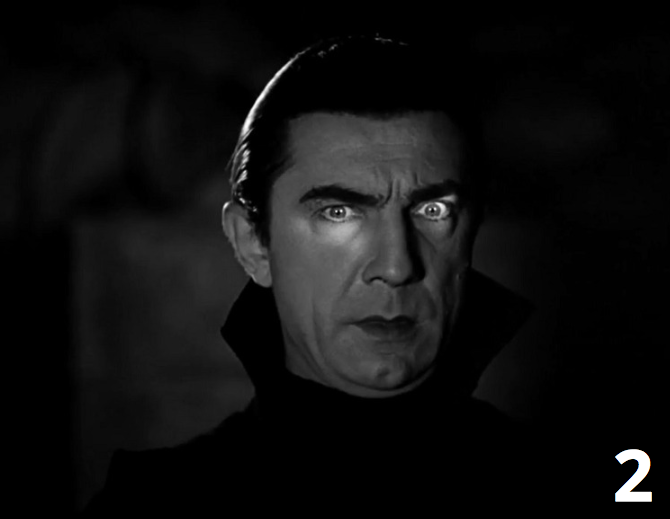 Famous Quote: “I am Dracula”

Bela Lugosi is one of the godfathers of movie villains that shaped the modern-day horror genre. His performance as “Dracula” in the 1933’s old time classic can give you nightmares to this day! The Romanian actor brings life to the famous Bram Stoker vampire making his most memorable and recognizable role ever. Many actors played Dracula after that, but there is only one Bela Lugosi! 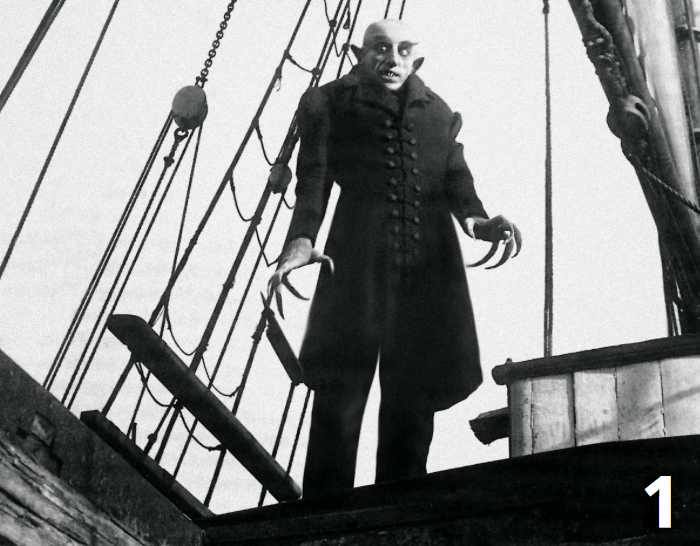 Famous Quote: “Your wife has such a beautiful neck…”

The classic German horror movie from 1922 is you pure horror experience. It just can’t get any better than this. The movie is silent which makes the atmosphere even more intense and the scenes even more frightening. The acting is surreal and you experience everything in the film not through sound and words, but only by visual appearance. The movie looks very impressive for its time and the makeup and the costumes are just brilliant.

The film company that made the picture couldn’t get the rights from Bram Stoker to use the name Dracula, so the main vampire was called “Nosferatu” which means “night creature”. The vampire is played by the German actor Max Shreck. You get the shivers every time you see him on screen. The way he moves, the way he looks – it’s almost like he is a real vampire. This is pure nightmare material and the fact that a silent movie made such a huge impact on the history of the cinema is really impressive. Having all of that in mind, we think that Max Shreck definitely deserves to be our number one on this list!

So, that’s all folks! What do you think of our list? Did we miss somebody? Let us know in the comment section and remember that you can always watch your favorite movies and tv shows on Stremio!