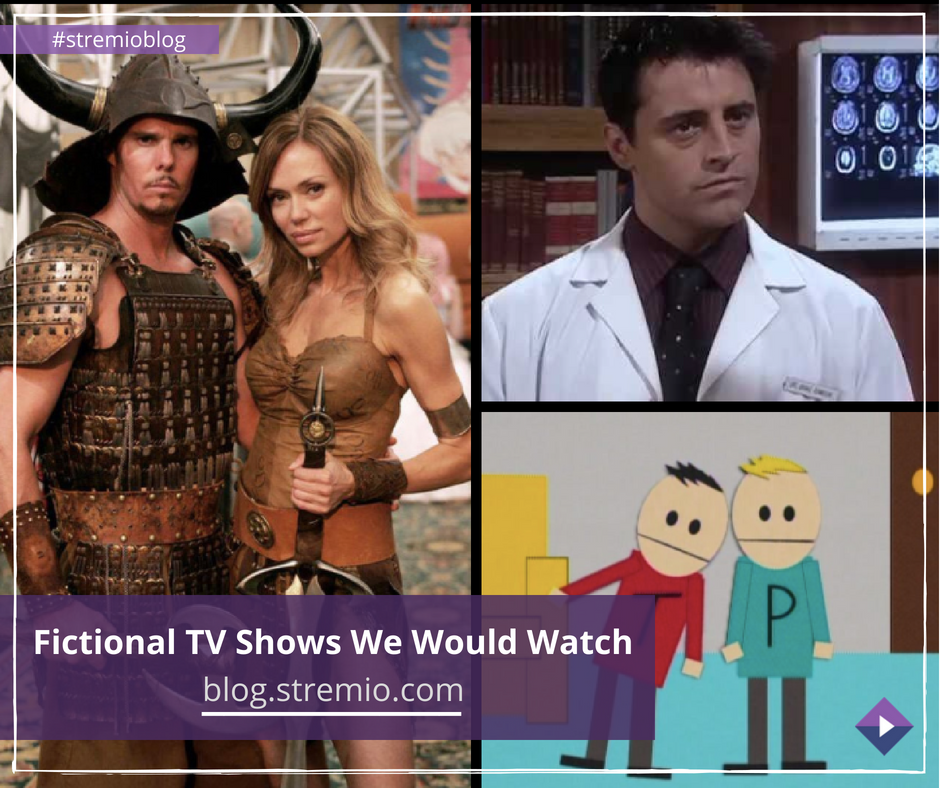 Some TV series through the years were so good and convincing that they managed to create their own reality. Sometimes that reality included these awesome fictional TV shows. You know, the ones that the main characters watch or appear inside the series. Many of them are as famous as the show they are originally in and are important for the development of the plot. Some of them have little to nothing to do with the storyline but were a lot of fun to watch. So let’s see our top picks of fictional TV shows we would watch if they had a real-life spin-off.

Chances are you are familiar with this one. “Fun with flags” is actually a YouTube podcast show created by Sheldon Cooper that teaches people about vexillology – the study of different flags. Amy Farrah Fowler, Sheldon’s girlfriend, also joins the show as a co-host. So far there were ten episodes of “Fun with flags” and the show has proved to be an important part of ” The Big Bang Theory”. It’s so nerdy and boring that it’s actually fun – and it can even teach you a thing or two about flags if you are paying attention.

The Itchy & Scratchy Show – The Simpsons

“The Itchy and Scratchy Show” is a crazy and violent animated TV show that often appears on “The Simpsons”. The main characters are a cat (Scratchy) and a mouse (Itchy) who beat the crap out of each other in all kinds of creative ways. It’s basically a violent Tom and Jerry parody with seriously graphic scenes. Most of the times the show gets up to one-minute of screen time and almost every time the winner is Itchy. The show is crazy, brutal and absurd, and this is what makes it so addictive to watch.

So far the fictional TV shows we talked about on the list were just a little part of the series they were in. Here, with the Truman Show, things are a little different. Truman Burbank (Jim Carrey) is the unsuspecting star of a reality TV show about his life and the whole world watches every minute of it. Everything around him was a lie. Even the people he knows turned out to be actors playing a role. The movie raises some serious concerns on the person’s right of privacy in a world ruled by media and technology.

Metro News 1 – How I Met Your mother

One of the main characters in “How I met your mother” Robin Scherbatsky works as a news reporter for “Metro News 1”, a low-budget local news station. Despite the low ratings of the program, she hopes that the job will get her to the next big step in her career. Only for that reason, she is serious about the job, despite the fact that even her boss doesn’t watch the channel she reports for. “Metro News 1” aired from season one to season four and it got a lot of laughs and funny moments that we still remember.

Terrance and Philip are a Canadian comedy duo who appear in “South Park”. They are the main stars in “The Terrance and Phillips Show”, the favorite show of Cartman, Stan, Kyle, and Kenny. It can be explained only with two words – fart jokes. The two poorly drawn Canadians make stupid fart jokes all the time and fart into each other’s faces. That’s pretty much what the show is all about. The funny thing is that the characters were inspired by the number of complaints about the fart jokes in “South Park”. So, in response, the creators of the series, Trey Parker, and Matt Stone decided to give them…more fart jokes of course!

Days of Our Lives – Friends

The TV show “Days of our lives” appeared in “Friends” as a parody version of the real “Days of our lives” TV series that aired back in 1965 on NBC. The parody had nothing to do with the storyline of the original material. Joey Tribbiani plays the role of Dr. Drake Ramoray, a famous and well-respected surgeon. Unfortunately, Joey angered the writers of the show, so they decided to kill his character. Dr. Drake Ramoray met his tragic death by falling down from an elevator shaft on one of the episodes. Eventually, he was brought back in the series through an absurd brain transplant.

The show, even today, has a huge amount of fans around the world and is one of the most famous ones on the list.

“My Roanoke Nightmare” is a “based on a true events” documentary series inside of the “American Horror Story” universe. It takes place in season six of the show named “Roanoke”. The show aired for five episodes in the fall of 2015.

The documentary tells about the horrible events that happened in a house in North Carolina and the events that the Miller family went through. The show features interviews from the members of the Miller’s family and other people in the neighbourhood. The survivors of the events give their take on the story, while different actors portray them as reenactments.

As you can expect, it’s creepy and bloody, and it doesn’t disappoint in any way the true fans of “American Horror Story”.

“The Scary Door” is a famous science-fiction TV show that aired on Earth in the 31st century. It takes place in the “Futurama” universe. It often makes multiple movie references, but mainly it’s a parody of “The Twilight Zone”. The storyline is usually very predictable, and the plot twists are very cliched. Only seven episodes of “The Scary Door” got featured on “Futurama”, but it is a pleasure to watch every single one of them. They are very enjoyable, funny and clever, but there is one downside – they are just too short! Why didn’t you made them longer, Futurama, why?

“Viking Quest” is a fictional TV show based in the TV series “Entourage”. Set during the mid-10th century in the Orkney Islands, “Viking Quest” follows the exploits of the Viking hero, Torvald (played by Johnny “Drama” Chase). Tarvold even has a signature exclamation, “VICTORY!!!”. It’s partly a parody of “Xena: Warrior Princess”. The series aired in 1997 on the Sci-Fi Channel and for some reason managed to develop a cult following. “Viking Quest” even got re-released on special edition DVD and got it’s own video game! Not bad for a fictional TV show, huh?

This was our list of fictional TV shows we would watch.

Don’t forget that, fictional or not, you can always enjoy your favorite TV shows and movies, on Stremio.